Book Review: Star Vs. the Forces of Evil The Magic Book of Spells

While I am a huge fan of behind-the-scenes material and making-of books, I’m also a big fan of things that are meant to be materials from a series or show (that is, if the items are done right).

With the television series Star vs the Forces of Evil, creator Daron Nefcy and some of her associates, first attempted to give their fans a “tangible” item the year 2017, with Star and Marco’s Guide to Mastering All Dimensions. The book provided some insights by Princess Star Butterfly and her friends, along with some tidbits regarding Star’s Magic Book of Spells. 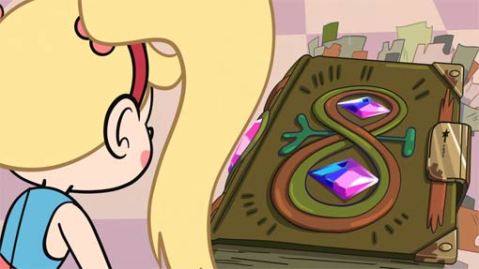 Scene from the book’s first appearance in the Star vs the Forces of Evil segment, Monster Arm.

Introduced in the show’s first season, the book of spells has been handed down through generations of Mewni Princesses and Queens. It was a place where they could put down some of their own thoughts, and provide information about new magic spells they had come up with.

Also contained within the book, is a little blue man named Glossaryck of Terms. One would assume that he would be there almost like a helper, but most of the time, all he seemed to do (according to Marco Diaz),  was “spout cryptic remarks and eat pudding.”

Though it is not-to-scale or as thick as the version seen on the show, Daron Nefcy, Dominic Bisignano, Amber Benson, and Devin Taylor have attempted to create a version of the book that reveals more about Mewni’s past…well, as much as is recorded by the women who ruled over the kingdom.

The main focus overall, is on the numerous princesses and queens that have come before Star Butterfly.  Up until now, we only had a few names revealed to us from the television show, but this book quickly fills us in on the others we were less privy to.

Like many royal lines lines in our realm,  Mewni’s has some interesting rulers, and a few “duds” here and there. Some of the entries are real page-turners, and others made my head droop as I struggled to stay interested. The book also gives information on several spells Star Butterfly has used, and just who in her past lineage, created them.

On the show, it was mentioned that the inside of the book is “a complete disorganized mess.” Of course, when dealing with a book for people to read from cover-to-cover in our dimension, it probably was made clear to Nefcy and her crew that there would need to be some semblance of order. However, the book does stick to it’s television counterpart, by having the table of contents in the center.

For those like me who were intrigued by the strange culture of Mewni, there was one thing I was hoping the book would finally do: blow the lid off of the strange symbols we’ve seen all throughout the kingdon on television.

While the book does not provide us with a Mewni-to-English alphabet, it does give enough information to allow the more astute readers, to decipher the symbols if they look through the book enough (or, just go online and find the people who have already figured it out!).

That ability for the readers to also interact with the book, seems to be something that creator Daron Nefcy prizes greatly. There was a bit of this in the last Star book she did, but here, that reader/book interaction is on display in a number of ways.

Readers are encouraged to cut out a few things here and there. Plus, it is assumed that the reader is now the book’s new owner, and is encouraged to personalize it, along with designing what their magic wand looks like, and creating their own log and spells.

The Book of Spells at over 256 pages, is almost on par with another show-oriented book that Disney Press released several years ago: Journal 3 from the hit television series, Gravity Falls.

Much like that book, Spells manages to take a tome that is well-known to the show’s viewers, and add some things that the die-hard fans are yearning to know about, as well as be an intriguing find, or a gateway to those who may not have heard of the series.

Personally, I was hoping for a bit more information written in the book from the numerous owners. At times, it feels like some sections were truncated due to the page-count.

Even so, I do feel that most fans of Star vs the Forces of Evil will enjoy what Disney Press has put out, and may bring in some new fans, who happen to come across the book.

Book Review: The Art and Making of Pacific Rim – Uprising

Taking place ten years after the first film, Uprising showed us a world that has been altered in many ways by the former Kaiju invasions. The once-in-jeopardy Jaeger program has been reborn, upgraded to newer models, and standing by in case of another possible invasion.

However, there is also a threat from the corporate world, as China’s Shao Industries, looks to streamline (and possibly privatize) the Jaeger program.

Over the years, the publisher Insight Editions has handled a number of behind-the-scenes books for Del Toro’s films, and they have continued to provide their services with this book as well.

These days, there are often a lot of things going on in some films, that it’s on-screen characters don’t have time to explain or point out. This has led to publication/tie-ins in the form of prequel comic books or accompanying publications, which to someone like me, can be seen as a bit much (most of the time, I just want to walk in and see the film). However, I am often moreso intrigued about the development and design process, that brings to life the images on-screen.

With this book, author Daniel Wallace manages to not only shed some light on the development process of the film, but provide plenty of additional pieces of information from those who worked on the film as well. We get everything from actors telling about their audition process, to the sound effects crew talking about how they came up with specific audio experiences you will now think twice about.

Reading books like these, I’m often surprised how I come away finding out information about the design process, that I didn’t consider. A good example is that the coloration of the numerous Jaeger models we see, are tied into certain protective units or branches in our society.

A good example is a Jaeger named November Ayjax, whose duty is to patrol along the war-ravaged Los Angeles Coastline. The coloration of the Jaeger is blue, tying into the theme of it being like a Police Officer for the area, “keeping the peace.”

I was also pleased at the over-abundance of different concept and design examples throughout. A prime example is in the design of Gipsy Avenger’s head. There are quite a number of iterations, and it feels like what we see in the book, are only a fraction of them. That ability for the book to provide a great number of visual concepts, made me eager to keep turning pages, let alone going back to review them once I had finished it.

Some of the many iterations of Gipsy Avenger’s head design.

For this book, they include everything from a collection of storyboard images, to Newton Geiszler’s (aka Charlie Day) Kaiju tattoo designs. While these are nice little additions to the overall book, I have felt that the company’s inclusion of these items affixed to the various pages gives them a greater chance of being lost. Personally, I feel they could have been included in a large envelope at the end of the book (maybe with a rubber-stamped “Classified Shatterdome Information” title across the front of the envelope!).

What I was most surprised about, was that while the book does give us insight into parts of the film, they also held back on revealing some major plot-points. I’ve often been apprehensive of some making-of books ruining everything about a film, but this one has just enough information to keep the overall story, a mystery. For the record, there are some images that do tie into some of the plot-twists, but they are never called out for the reader.

Earlier this year, I was eager to get my hands on another Insight Editions tome: The Art of Ready Player One. However, while that book gave me plenty of information, I felt it didn’t answer as many of the questions I had regarding it’s visual design/development phase. In contrast, The Art and Making of Pacific Rim: Uprising ended up feeling like a much more satisfying read. For those that enjoyed Pacific Rim: Uprising, this is definitely a fitting companion book, and one of the more well-compiled reads I’ve encountered in awhile that connects to a feature-length film.