Currently available on Netflix. Rated TV-MA for Language and Smoking

Sometimes, truth is stranger than fiction.

On June 4th, 2004, an armored bulldozer rampaged through the small mountain town of Granby, Colorado. Heavily-fortified with steel and concrete, the dozer caused millions of dollars in property damage over a few hours, before it’s driver Marvin Heemeyer, took his life.

The story was national news for 24 hours, and then the newsfeed was taken over by the death of former President Ronald Reagan the next day. After that, there was no additional coverage or follow-up as to why Heemeyer had done what he did. 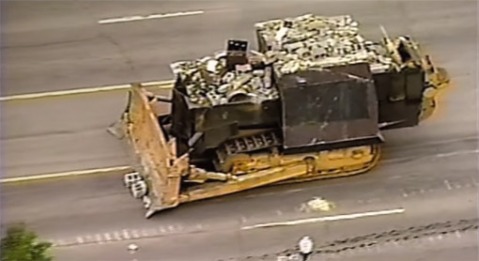 Director Peter Solet and his brother, were two people that became interested in understanding more about what led up to that fateful day. Now after almost a decade, that research has been released in the form of the documentary, Tread.

A former Air Force pilot with a knack for welding, Marvin Heemeyer ended up owning a muffler shop in Granby. Some claimed he seemed friendly and reliable, and made enough to support his hobby as an avid snowmobiler.

Where things started to go downhill was when Marvin purchased several acres of land in town. According to audio cassettes he recorded months before his rampage, the purchase seemed to begin a chain reaction which led to a number of prominent people in the community deciding to make things difficult for him. Eventually, Marvin started believing that God was telling him what he could do to “level the playing field.”

Along with Marvin’s voice utilized via audio cassettes, there are a few people he knew that also give some additional insight into him. However, they are little more than local acquaintances, and only take up a very small amount of screen time.

Most of the interview time happens to go instead, to a number of people and prominent family members in Granby, whom Marvin claims “wronged” him. Most notable about the local people interviewed, is they seem relatively calm, with nary a harsh word towards Heemeyer, and some even contradicting his feelings and verbal tirades. Most seemed relatively unaware he was harboring such deep grudges towards them. 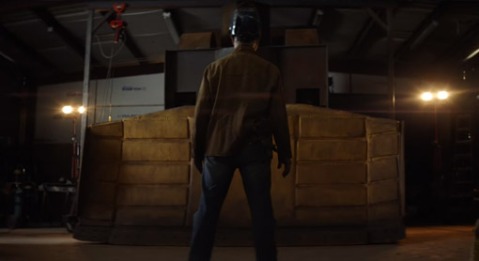 Much of the film contains re-enactments of some scenes, with the more interesting ones occurring once Marvin decides to purchase a bulldozer from a California auction. This leads to the more action-oriented finale of the film, where parts of the rampage are recreated with a replica of the bulldozer (though thankfully, not filmed anywhere near Granby).

While the story of what led to the events that fateful summer day do make for a good story, it feels like Solet (who is also the writer), narrows his focus a little too much, deciding to only gather information on Marvin during his life in the town.

We do learn about Marvin having family and spending some time in Florida with friends, but none of them are interviewed or provide additional insight regarding him. We don’t know what he was like as a child, or if maybe something in his past or his time in the Air Force affected his thinking. There are points where we see pictures of him with weaponry as well as him speaking about God giving him his task. These are extra character avenues that had me wondering what others had to say regarding these circumstances.

Tread also perplexed me with how it ended. Once the rampage is over, the film just peters out. One would assume we’d get an epilogue exploring more of the town of Granby, and how what Marvin did affected it all these years later. We don’t even get to hear what the local citizenry have to say about Marvin, or even get eyewitness accounts from regular people who he may have serviced in his muffler shop, or who watched the rampage that day.

That to me is the problem with Tread: it feels like it’s missing some extra material to flesh out the film and make it seem a little more “balanced.” While we do get some good insight about Marvin Heemeyer, it feels like the filmmaker is really just in a hurry to give us the cliff’s notes version of his life in the small town, and get us to “the money shot” as quickly as possible.