Raiders of the Lost Toyline: Charlie and the Chocolate Factory (2005)

*For every Toyline that takes hold like Star Wars or My Little Pony, there are many that never get beyond their first steps, and quickly die out. In this column, we’ll take a look at some of those Lost Toylines*

In the Summer of 2005, there was much teeth-gnashing by many moviegoers. It wasn’t enough that George Lucas had made Darth Vader whine in agony with James Earl Jones’ voice, but to many, Warner Brothers and Tim Burton were committing a major crime against childhood, by (re)making Charlie and the Chocolate Factory.

The majority of those who were upset, claimed the studio was remaking the 1971 film (titled Willy Wonka and the Chocolate Factory), which was based off of author Roald Dahl’s most famous book. Even with Burton and Johnny Depp telling theater goers that their take was closer to Dahl’s writing, many just claimed Depp wasn’t as awesome as Gene Wilder’s take on the Wonka character.

A promotional image from the 2005 “Charlie and the Chocolate Factory.”

Aside from giving Willy Wonka “daddy issues” and making him a pale-skinned eccentric, there wasn’t really that much I could see to complain about. Then again, I’m sure many would express the same ire if word came that The Wizard of Oz or The Neverending Story were going to be more “faithfully adapted.” Plus, I never really held the 1971 film in as high of a regard as some people (live-action musicals were not a staple of my childhood viewing ‘diet’).

Unlike the 1971 adaptation, Charlie’s distributor Warner Brothers knew there was money to be made from merchandising. Familiar companies like NECA Toys, and MediCom(known moreso for its collectibles in Japan), were soon touting their wares. But in a press release from Warner in January of 2005, it was announced that a lesser-known company would be joining in on the mix(ture). 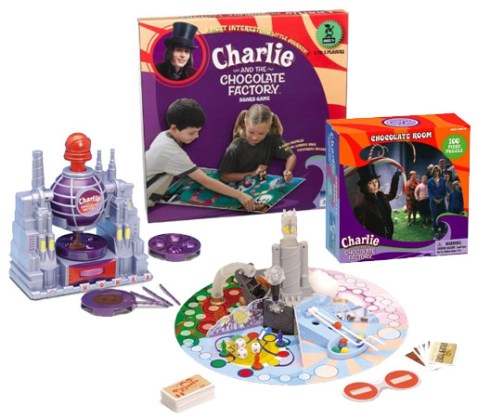 Several of the products Funrise Toys produced in conjunction with the film.

The other two companies would also make figures, though they would moreso focus on those of Willy Wonka, and several of the Oompa Loompas. Funrise‘s figure releases were more notable, as their assortment would contain the only figural representations of the films’s 5 lucky golden ticket winners.

The full assortment of figures included:

Each figure came in a blister pack, along with a green base, and a sculpted candy plant, based on the same designs of those seen in the film’s Chocolate Room.

The green base that comes with each figure is identical, with a peghole for each of the specific plants, as well as a peg for the figures to use for standing. The only difference among the bases, is the one for the Oompa Loompas, that has an added peg for the additional Loompa to use.

One would assume that with a major summer film like Charlie, the figures would have been popping up at every single toy/retail store. Instead, it seemed very few of the retailers bit at Funrise’s offerings.

When the series of figures was released that summer, it was (scheduled) to be released in two waves (to the best of my knowledge). I recall seeing figures of Wonka, Charlie, and Augustus at a Spencer’s Gift shop, as well as a few Wonka’s at a Toys R Us. However, I never saw any of these figures hit the big-box retailers like Walmart, or Target.

As for the release of the additional figures (aka ‘the second wave’), I couldn’t find any information on how Violet, Veruca, Mike, and the Oompas escaped into consumer’s hands.

The only place I ever saw the additional figures show up, was on eBay, and most of them were being sold from overseas. While many of the auctions for the film’s figures were made up mostly of the first-wave figures like I had seen at Spencer’s, if you were patient, every-so-often the others might show up. Of course, they wouldn’t come cheap (I recall an unopened Violet figure going for around $70 on one auction I watched, a few years after the film came out).

The figure’s packaging appears to have also not fared well since their initial release. Finding a ‘Mint on Card’ rendition of each figure proved to be well-nigh impossible. Every carded figure I obtained had bends or slight tears in their cardbacks. As well, the adhesive used to hold the plastic bubble to the card, had begun to wear off on several of the cards I have. Below, you’ll see a few examples of the packaging ‘problems.’

Examples of abrasions and adhesive problems on several of the figure’s packages.

While looking online, I was able to find some early prototype images on one site. What was most notable were the figures of Veruca, Mike, and Willy.

Veruca’s prototype image shows a different type of candy tree, and unlike her pink purse being a removable object, it is actually underneath her fur coat (which is how she wears it in the film as well).

Mike not only has a different candy tree as well, but his prototype shows the ‘flaming skull’ image that the character has on his t-shirt in the film. For reasons unknown, this design was not included on the final figure release, even though the assortment image on the back of each figure’s card shows the proper shirt design.

Speaking of the back of the figure’s cards, one interesting difference can be seen regarding Willy Wonka. The figure image on the back shows Willy with an open-mouthed smile, whereas the final sculpt differs greatly. It may be just me, but it almost looks like they did a last-minute head re-sculpt. My guess is they were trying to make Wonka look more enigmatic, but the end result looks like either his head’s too big, or his top hat shrank in the wash.

Along with the single-carded figures, Funrise also released a Wonka Figure Assortment consisting of Willy, Charlie, and the two Oompas, but without their candy room bases and plants.

After 2005, it seems Funrise did not consider another attempt at being the main action figure producer for a feature film. According to their current website, they are currently producing additional plush and toy offerings, for successful brands such as My Little Pony, Pound Puppies, and they also appear to be the official license holders of a toyline I recall from my youth:Tonka Trucks.

Originally, I was going to end this Raiders article here, but a little voice in my head reminded me of something. In looking for information on these figures online, I think I am the first person to ever do an article on these ‘lost toys,’ and as such, I could very well run several in-depth reviews on each of these figures. There are only a few other reviews of this figure series online, and they only covered the Willy Wonka figure.

There’s not a whole lot to these toys, but I think there’s plenty to analyze and review, and besides, I’ll be adding a little more information to the World Wide Web. Be on the lookout for my 3-part review of the Charlie and the Chocolate Factory action figures, in the not-too-distant future.

4 responses to “Raiders of the Lost Toyline: Charlie and the Chocolate Factory (2005)”