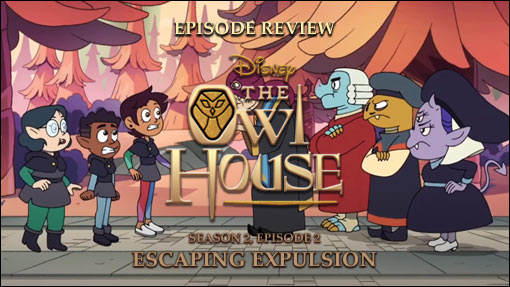 With the second season release of The Owl House, we return to The Boiling Isles to find out what has happened to Luz Noceda, King, and the Clawthorne sisters, Eda and Lilith.

The previous episode showed us what life has been like for the denizens of The Owl House, but this episode brings us up to speed on some other characters, and also explores some new areas.

With both Eda and Lilith now powerless, Luz has taken to teaching them how to use glyph-magic. While Lilith seems to be quite inquisitive, Eda is hardly enthralled to be learning.

Back at Hexside School of Magic and Demonics, Principal Bump is forced to expel Luz, along with her friends Willow and Gus. The reason? Amity Blight’s parents Odalia and Alador blame them for hindering their daughter’s studies. However, Luz is not going to take this lying down, and tries to figure out a way around this accusation.

After a shadowy introduction last season, many were curious as to who Amity’s parents were, and it seems the showrunners waste little time in getting their official introduction out of the way. Of course, this does make me question, if we get everything we need to know about the Blight parents in this episode…or, if they are going to have a character arc as the season progresses.

Most surprisingly, it seems to be Odalia Blight who is calling the shots around the family business. Alador Blight on the other hand, is somewhat of an introvert, but quite skilled with altering Abomination magic with technology.

One area of excitement for this episode was seeing Luz, Willow, Gus, and Amity all back together (for the first time since last season’s episode, Wing It Like Witches), but the episode quickly scatters them after a few minutes together. It also feels rather repetitive that we have another episode wherein Luz is declared expelled/banned, after this declaration was noted in several of the first seasons episodes.

For the episodes “B” plot, we focus on Eda and Lilith studying glyph-magic in Luz’s absence. This is out first glimpse of the two sisters having to really deal with bouncing ideas off each other, and it proves to be quite an entertaining sub-storyline. There’s some humor mined in seeing Lilith become somewhat of a “teacher’s pet,” while Eda struggles with her own ego.

Plus, things learned from the previous episode are carried over, as demonstrated by some scenes showing Lilith and Hooty interacting.

This was an episode that once it got started, I was starting to feel like things were getting back on track with the familiar story structure of the previous season. However, much like the last episode Separate Tides, this story feels like it is a little too overloaded with stuff.

The “A” storyline is where this feeling was most prevalent. There’s stuff dealing with Odalia’s control over Amity, some new information on Willow’s parents, let alone Luz’s friends working together without her, but it all feels quite forced into the story. There even comes a moment near the end that could have had a much stronger emotional impact, if much of what we saw in this storyline had 2-3 episodes to “breathe,” rather than just being forced into this episode.

Surprisingly, the flow of the “B” storyline with the Clawthorne sisters proves to be the smoother-flowing element. It is also notable how the episode helps break down some more information about glyph-magic, let alone the possibilities of mixing them into more powerful spells.

Escaping Expulsion is so far the best episode of season 2, but the fact that it also feels a bit too full of stuff makes me wary for future episodes. Are the next episodes we encounter going to have this unbalanced feeling to a number of their storylines too?