For those of us who grew up in the 1990’s, there was one commercial ad campaign that you couldn’t ignore.

Beginning on October 27th, 1993, the Got Milk ad campaign officially began showing up on TV. Soon it would be in print magazines, on billboards, and many other places.

For many like myself who watched a lot of television in the mid-1990’s, there are many commercials that were made for the campaign, that are still stuck in my head. There were so many, that I decided to compile my (personal) Top 5 favorites from the Got Milk ad campaign (hint: most of them are from the early days of the campaign).

And so, here’s my little stroll down memory lane.

A nervous man enters a convenience store, and picks up three boxes of cereal, including Trix. At the register, the old woman chastises him for this.

“Don’t you know Trix are for kids?” she laughs, ringing him up, as he bolts out the door.

Once returns to his apartment, the man empties the cereal into a bowl, before suddenly, unzipping his skin(!), revealing that he is the Trix rabbit in disguise!

The rabbit is finally about to enjoy his cereal, when he realizes…that he’s out of milk!

Over the years, the Got Milk campaign would often bring some star-power into their commercials. After all, how else to get the kids’ attention, than to use characters and icons they were familiar with? Additional iconic characters used over the years, included The Powerpuff Girls, and Mario from Nintendo.

Personally, I felt that the Trix rabbit commercial was the stronger of these concepts, given that it played with the topic of desperation, and then trips up the main character right before he can achieve his goal…which was often a staple of many different Got Milk commercials.

Of course, if one looked at the commercial logically, the rabbit could simply eat the cereal without milk (plus, four years before this commercial came out, a promotional campaign had let kids across America, vote to let him eat the cereal during a Trix commercial). 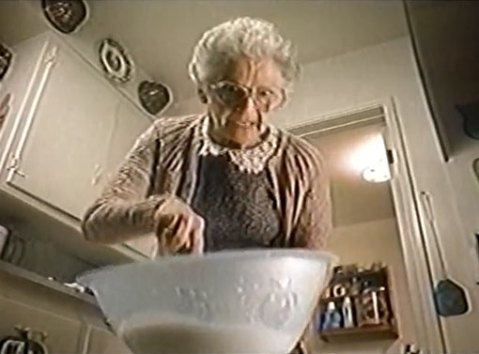 As the clock strikes six, an old woman prepares to feed her cats. Unfortunately, she quickly realizes she’s all out of milk.

Looking for a substitute, she finds some non-dairy creamer in a cupboard.

Mixing the creamer with water, she then proceeds to feed the cats…but one lick, and they turn on her.

Next thing we see, are paws closing the blinds, locking the doors…and turning off the power to the house!

This was one of those commercials where someone tries to get out of a bad situation, but as we soon see, their fate is sealed.

Most likely thanks to a number of Stephen King-based films, we know that when you mess with cats, things aren’t going to turn out well. Though as the commercial begins, I don’t think anyone expected the final outcome, making the final moments both humorous…and a little uncomfortable.

As the commercial starts, we see a businessman firing someone over his cellular phone…before nonchalantly walking out into the middle of a street, and getting hit by a truck!

Next, we see him in an all-white world.

“Welcome, to eternity,” a female voice says, as the man notices a pile of huge chocolate-chip cookies on a table.

“Heaven,” he murmurs, taking some bites, before going to the nearby fridge, and finding it filled with milk cartons.

However, as he picks one up, he finds it empty. Pretty soon, he realizes that all of the cartons are empty!

The businessman and his joy over someone less-fortunate than himself, seems very much in line with Twilight Zone characters who realize too late, what their selfishness has wrought upon themselves.

The kicker for this commercial, is we don’t even need to be told where this guy is spending “eternity.” It’s spelled out for us in the Got Milk logo we see at the end of the commercial…which is on fire!

In a boardroom, we see a number of men sitting around a large table, trying to name a familiar black-and-white sandwich cookie.

As the men dunk their cookies in milk and play with them, all sorts of names are thrown out, from “twist-o-cookie,” to “choco-lama.”

The head of the company (named C.W.), doesn’t feel any of these names are winners.

“What do you think, Hurley?” he asks, to a man with his mouth full of cookie.

At this point, Hurley attempts to pour himself a glass of milk, but finds the carton empty. Addressing the boss, he shrugs his shoulders, and mutters through his mouthful of cookie: “Or-eo (aka ‘I don’t know’).”

I’ve always been a fan of word-puns, and the way the writers come up with the punchline for this commercial, has always been one of my favorites! It’s still funny to see Hurley’s “accidental genius” moment.

While we have seen other cookie-related Got Milk commercials, the Oreo sandwich cookie has often prided itself on being an accessory to milk. This was one of the few times where we had a food product referenced by name in one of the commercials, rather than the nondescript chocolate-chip cookies in a number of them.

As the commercial opens, we see a man sitting at a table, making a peanut-butter sandwich. As he stuffs the sandwich into his mouth, the radio program he’s listening to, begins it’s daily contest.

Just then, the phone rings. The man picks it up, and hears the announcer’s voice!

However, his mouth is still crammed full of sandwich, and he is unable to clearly say, “Aaron Burr.”

Grabbing the carton of milk nearby, he finds it to be empty…just as the radio announcer says his time has run out, and the phone-line goes dead!

I don’t think it’s any surprise that this, the first Got Milk commercial, ended up being my favorite.

What is surprising to a lot of people, is when they find out who directed this commercial: Michael Bay!

Bay’s kinetic filming and editing style is on display here, as the scenes cut fast-and-furiously all around the room. We get all sorts of information that the guy in the commercial is a huge fan of Hamilton and Burr, though when one stops to question things a bit more, it can make your head hurt (as most of Bay’s feature films have done).

The commercial went on to win several awards, and in 2015, was parodied in a promotional commercial, related to the hit Broadway musical, Hamilton.

The campaign also branched out into advertising for chocolate milk, and even had a Hispanic outreach with the slogan, Familia, Amor y Leche (“Family, Love and Milk”).

In 2014, there was an attempt to change the Got Milk slogan to Milk Life. However, in the Summer of 2018, Got Milk officially returned, to try and give the dairy products a boost, in the face of 21st century offerings like almond and soy milk. Plus, just like the big to-do over the years regarding the health benefits/risks of “the incredible edible egg,” dairy-based milk may not be the be-all/end-all to strong bones, and prevention of osteoporosis.

It’s interesting to think about what has happened to the world of milk-based products over the past 25 years, and if the current attempts to steer people back towards the dairy aisle, will work as well in the early 21st century, as it did on people’s consumer tastes in the late 20th century.