After 4 episodes, we’ve gotten to explore the different worlds that Star Butterfly, and Marco Diaz inhabit. We’ve seen them interact on Earth, fight monsters, and take a few dimensional trips here and there. Episode 5 continues to develop their world, with the segments Diaz Family Vacation, and Brittney’s Party. 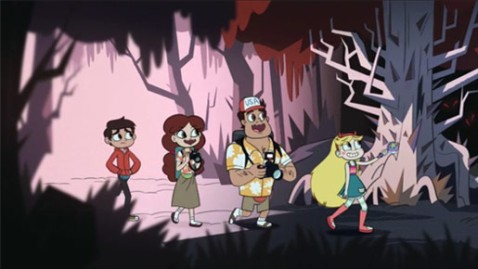 After a brief chat with her parents by way of her magic mirror, Star is informed by Marco about his parent’s wedding anniversary. Wanting to get them something for being “cool,” Star tells Marco’s parents that she’s taking the entire family to Mewni as her present to them…even though she’s not supposed to travel outside of Earth (or even possess ‘dimensional scissors’ to get the Diaz family to her world).

Star figures she can get by with guiding the Diaz family around the poorer areas of the kingdom, but panics when she sees her father is out amongst the common-folk. She then decides to detour the Diaz family into The Forest of Certain Death, where numerous creatures lurk.

A highlight of the episode is seeing a little more of the Land of Mewni, of which we were only introduced to about 5 minutes worth in the premiere episode. However, we get to see it as a kingdom built on layers, with the lower-class living in a European-style village. The showrunners attempt to wring some gags out of the weird locals, but it’s only marginally humorous.

Speaking of humorous, Marco’s parents are their usual, happy-go-lucky selves, with some of their humorous moments almost made from them being a little un-pc at times.

The journey into The Forest of Certain Death is where the episode really starts to pick up, showcasing some more of the different creature designs of this alternate dimension. As well, I’m sure many will be surprised how one of the more notable creatures is handled by Star and Marco.

An added highlight, is that we even get some time with Star’s father, which helped place another piece into the puzzle of just who Star Butterfly is.

Much like Quest Buy and Party with a Pony, this is another inter-dimensional romp that makes us wonder what more we could see if the episode had been longer. Like those two, I can just hope these are dimensional worlds we’ll be exploring in more detail in the future. After all, there’s bound to be more to Mewni…than meets the eye…

Best Star Butterfly line from segment: “So this is what it’s like to be bored to death.”

Echo Creek Academy’s head-cheerleader Brittney Wong is throwing an invite-only Birthday Party. When Brittney tells Star she can come to the party “when pigs fly,” Star conjures one up and immediately assumes she’s in…not realizing Brittney meant it as a figure-of-speech.

Later on that evening, Star transports herself and Marco onto Brittney’s party bus, much to the head cheerleader’s ire.  It also doesn’t help that Marco gets car-sick easily, and Ludo and his minions show up to hijack the bus.

A plus regarding this episode, was a continuation of the Marco Diaz/Jackie Lynn Thomas story dynamic, albeit briefly. We also see some callbacks to some of the other characters on the school’s cheer team, as introduced in the episode 2 segment, School Spirit. One notable is Sabrina, who ended up in a wheelchair in.that episode. Given what she went through in that segment and in Brittney’s Party, it looks like she’s going to become a regular “victim” in regards to pain, from both Brittney, and external forces.

We get to see some more of Star’s schoolmates, and her interaction with them too.  She’s super-friendly to everyone, including someone as snarky as Brittney Wong. However, even her best intentions do nothing to quell Brittney’s ice-queen demeanor.

The dynamic of Brittney Wong not being at all happy about Star crashing her party seems to work as a double-edged sword. On the one hand, Brittney is used to being the “it” girl, and it seems that Star is taking away the focus from “her” party. Star however, has no intentions of taking attention away from Brittney, but just wants (like during her days at school), to make sure everyone at the party is having a good time!

Of course, the fact that Star can do all sorts of magical things that cause everyone at the party to cheer, quickly gets on Brittney’s nerves. As well, Ms Wong does do a few things that might make her less-likable to some viewers (I think those who see the episode will know what they are).

The inclusion of Ludo and his gang, seems a little flimsy, almost as a way to patch up the third act of the 11-minute segment, to make the party go out with a bang. Even so, I can’t help but think this is the most I’ve ever laughed at Ludo in a particular episode. Alan Tudyk’s vocal work definitely makes me smile every time I’ve watched the segment. 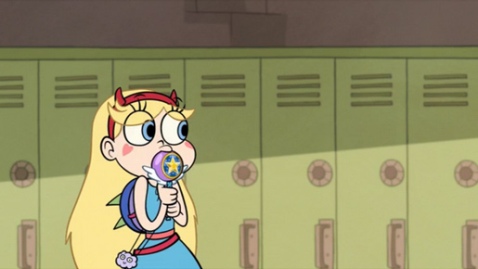 Overall, Episode 5 was middle-of-the-road when it came to being entertaining. Diaz Family Vacation was the highlight, in showing us a little more of Mewni, and Star Butterfly’s father. Brittney’s Party tries to balance itself between the effervescent Star Butterfly, and the snarky Brittney Wong, but never quite manages to make itself wholly entertaining. One almost has to dig through it to find choice moments that stick.

As of this article’s posting, word is that a number of shows on DisneyXD are going to be on hiatus for the month of May, including Star vs The Forces of Evil.

My intentions were to do weekly reviews of the show during Season 1, though the lack of new shows for the next few weeks, means I’ll be going back and doing episode reviews for the first three episodes, as I just started reviewing the show in the last week.

A month-long hiatus will also be interesting, in regards to seeing how the current fans deal with the wait, as well as how many new fans will be gained, and be chomping at the bit when episode 6 comes out in June.